Today was Day 11!  Eleven straight days of walking, 2 or more miles every. single. day!  I've been avoiding telling my family about my new venture.  I finally cracked and told my mom that I'd been walking every day for a couple of miles each day yesterday.  Oh, did that remind me of why I was trying to not mention anything!  I love my mom.  Really, I do.  But sometimes, I don't like her very much.  Please don't think badly of me for that one!  I really do love her.  But as I've gotten older and become a mother myself, it's opened my eyes to a great many things.  You see, almost everything in life is a competition for my mom.  Not because she's competitive, but because she sees what other people have, what other people do, and wants to measure up to them.  She can be very hard to please.  She's on her third marriage now and has a tendency to complain about her husband quite a bit.  Which makes me very sad.  No person is perfect and I expect her husband isn't anywhere near perfect either.  But neither is she.  And he absolutely adores her!  That should count for a great deal.  So...my mom's response to me walking for 10 days...."have you lost any weight?"  It's only been 10 days and to be honest with you, I don't want to step anywhere near a scale just yet!  I knew before I told her what she would say.  I'm not surprised by it.  But, I am a bit disappointed.  Isn't it funny how no matter what age we are, we still look for our parent's approval?

I want to share something with you tonight.  My life in weight.  You see, I never intended to weight what I currently weigh.  I never would have imagined that I would be the size that I am.  You're all curious what my weight is, aren't you?  Two hundred and fifty-eight pounds.  It's less intimidating to write it out that way than to put a 2 followed by a 5, closely followed by an 8.  It's a scary number!  So here's the cliff-notes-version of how I got to where I am...

I was 9 lbs even at birth.  From that moment on, I was always on the smaller side.  I barely registered on the growth charts.  My mom often called me "Skinny Minnie" growing up.  Common nickname, I know.  I HATED it!  I was always the skinniest kid in class, one of the smallest girls.  I was diagnosed with diabetes 3 months before my tenth birthday.  I weighed 45 lbs at diagnosis (I'd lost 9 lbs in the process of getting sick with diabetes, so my weight at the time was 54 lbs).  At 14, I weighed just under 100.  At 15, I was 110.  I was thin and a perfect size 6. 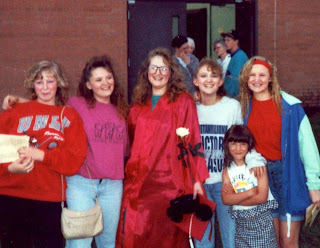 I'm the one on the end, in the blue and green coat.  You want to know something though?  I hated being that size!  Not so much because of the size though.  This violates every ounce of humility and modesty that I have, but....I hated being that size because of the attention it got me.  I was the quiet kid.  The shy one.  I was probably every teacher's worst fear come to life when I was little.  I was so incredibly, painfully shy that if the teacher spoke my name or called on me in class, I turned bright red and clammed up.  So you can just imagine how well it went over when one of my sister's boyfriend's friends (who happened to be over 21) told me that he thought I was gorgeous and going to be a heartbreaker.  Or when boys in school would make cat-calls down the hallways or try to snap my bra.  It was painful for me.  And then, a year later, at 16, it all stopped.  Puberty hit.  My metabolism came to a screeching halt.  I weighed in at 145.  Not a huge amount just yet though.  The next year, I was up another 15 pounds.  I walked my high school graduation weighing 176.  Off to college I went.  I only managed to last for a semester during my first attempt.  I put on the Freshman 15 plus an extra 10.  I was 19 and weighed 200 pounds.  And I stupidly resorted to the worst thing a diabetic can ever do to themselves....I manipulated my insulin in order to lose weight.  It worked.  I dropped down to 175.  Until I woke up one morning and couldn't see.  I started taking care of myself and my weight went back up to what it was before my stint as an idiot.  When I decided to go back to college, I chose to stay home (much to my mom's frustration) and attend our local community college.  I took up a student-worker position as the ungodly-morning-hours supervisor of the student fitness center.  I started at 6 every morning.  Luckily, more often than not, it was just a couple of little old ladies who came in to use the facility.  This meant that I could spend my "work hours" working out on the equipment.  My weight stayed pretty stable for the next couple of years.  When I graduated with my Associate of Arts degree, I chose to transfer to the University of Minnesota-Minneapolis.  Huge, huge campus.  With very limited parking.  This actually worked in my favor.  Parking, affordable parking...was a good 4 blocks from campus.  My first class was just inside campus.  My second class....was on the opposite bank of the Mississippi River!  You wouldn't believe how much walking I did for that entire year!  It was nuts!  I finally dropped back below 200.  But I hated the University.  It was a great experience for me because it finally cracked my shell wide-open.  I stopped caring what people thought.  I realized I could be whoever and whatever I wanted to be and who cared if there was someone who didn't like me?  It was right around that point and just after that realization that I met my husband-to-be.  I was in the process of contemplating transferring to Bemidji State University.  But Jake was a student at Minnesota State University-Mankato.  So...I chose to transfer to be close to him.  The smaller campus and the fact that I started stress-eating, eating out more often (on dates, usually), and eating convenience foods didn't do anything for me.  My weight slowly crept up over the years.  College graduation, full-time employment, buying a house...through it all, my weight crept up just a little at a time.  By the time I got pregnant with Lily, I weighed 230.

During my pregnancy, I made a lot of changed.  I started trying to eat mostly protein-based foods in order to control how much insulin I would have to take.  By the end of the pregnancy, my daily amount of insulin was close to 100 units!  Lily was born severely tongue-tied.  She wasn't able to nurse.  But I was so determined that she be fed breastmilk in order to protect her from the threat of diabetes (haha, joke was on me for that one, huh? but at least I did everything I could and don't have to doubt or dissect what I did).  I pumped, exclusively, for 10 months straight.  Oh, I can't even tell you what hell that was!  I developed an amazing appreciation for dairy cows!  Breastfeeding is not meant to be done by machine!  Pumping is an awful thing to do to your body.  Seriously.  I produced for the pump instead of for a baby.  Which somehow equated to producing enough milk for quintuplets (that is NOT an exaggeration!).  But, breastfeeding by pump also had this wonderful side-effect....the weight literally melted right off of me!  In ten months, I lost 50 lbs!  And then I got mastitis.  I started the treatment for mastitis and before it had cleared up, I was also battling thrush.  Pain doesn't even begin to explain how that felt!  I quit pumping cold-turkey.  Within a couple of months, I was pregnant again.  And putting the weight back on very quickly.

By the time Leo was born, I was back up to my pre-pregnancy weight from before Lily was born, plus all the baby weight from Leo.  Leo was an excellent nurser, from the very beginning.  But nursing didn't have the same effect this time around.  My weight slowly crept up again.  Seven months after Leo was born, Lily was diagnosed.  My nights of very little sleep turned into nights of no sleep.  Sleep has an amazing connection to how well your body processes food and insulin.  The less sleep I got, the less energy I had, the more weight I put on.  It's a bad, bad equation.  Add into that comfort-eating, stress-eating, and boredom-eating.  It's not a pretty picture.

So, here I am, just a little more than a year after Lily was diagnosed.  Things feel like they've finally settled, at least somewhat.  I'm still not getting much sleep.  But I'm recognizing the ways my life needs to change.  I'm seeing my part in getting to where I am now.  And I'm terrified of teaching this lifestyle to my children.  I've decided on a challenge for myself.  It takes 30-40 repetitions in order to form a new habit, for most people.  So, my goal is do 30 days straight of walking or exercising for an hour each day.  I've done 11 days so far.  The last couple of days, it's been a bit tough to do.  I've been feeling a bit sore.  In fact, the last two days, I've started the walk with the intention of taking it easy, doing a shorter walk.  But once I started, I felt the need to keep going!  It's incredibly how that happens!  So, it may not be an easy thing to do, but I'm going to keep going and hope that I can make it the full 30 days!

In order to end this in the most positive way possible, I'll share one more thing with you.  My husband usually comes home from work while I'm cooking dinner.  He has a habit of coming up behind me, while I'm cooking, and giving me a hug and kissing my cheek.  Yesterday, during this ritual, he gave me the best compliment ever.  He hugged me and said, "wow!  You feel firmer already!"  Screw focusing on the weight-loss part of this.  I'm going to focus on the being-in-better-shape part so I can get more compliments like that from him!
Posted by Cindy at 8:21 PM