I have a new friend that I don't think I can live without.  Seriously.  Want to know what (not who) my new best friend is?  Aveda Foot Relief lotion.  Aveda is this incredibly cool company that uses all pure ingredients and focuses on non-polluting products.  Personally, I love their products.  But I've heard a few people voice complaints because they're very "herbal-scented".  Anyway, the foot cream is my new best friend because, without it, my legs would be turning into sore, achy, sticks of jelly.  Today is my 5th day in a row of walking 2 or more miles!  I think that just might be a record for me!  Usually, when I attempt to start a work-out routine, I go every other day.  And I can never keep it going.  So, this time around, I'm attempting every single day, no breaks.  Which is partly why I'm choosing walking as my form of exercise, at least to begin with.  It's something I can do every single day without needing a break from it.  Maybe once I've made this a new habit and gotten used to all the new exercise, I can add in something more strenuous.  And until my body adjusts to the new amount of exercise, I think I may be buying stock in Aveda.  Or at least buying the foot cream in bulk!

For my walk today, I took the kids back to the Lake Calhoun path.  I left my husband napping (he got up bright and early with the kids this morning-apparently walking lots means I need more rest in order to feel functional!).  Meri, I grabbed the camera on the way out the door just for you: 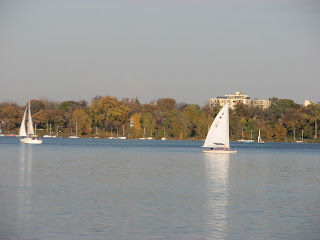 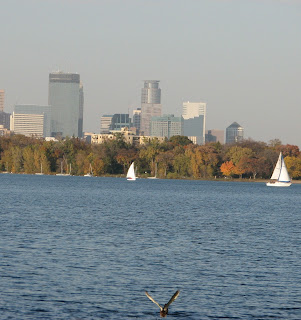 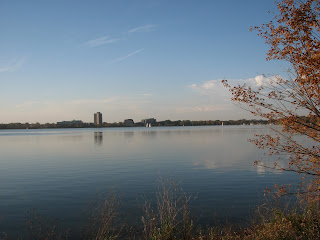 The lake, without the zoom lens 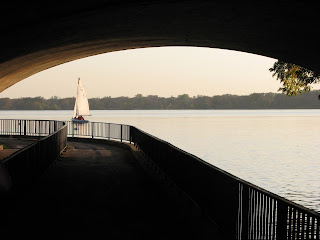 A picture of the lake, from the lagoon
Reyna, I'm devoting my post tonight to answering your question....do I have a dog?  The short answer is, no dog at the moment.  But there's an explanation behind it.  You see, this is my old best friend: 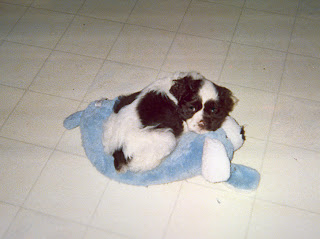 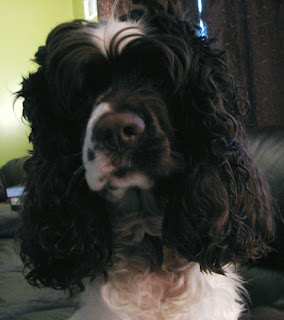 Adorable, right?  Peppy.  The name suited him perfectly!  He was all pep!  Our little happy-go-lucky puppy.  My husband and I bought our house in October of 2005.  If I'd had my way, we would have adopted a dog within a week!  It took a little more work to convince my husband.  I finally told him that all I wanted for Christmas was a puppy.  Nothing else.  We found Peppy, a teeny little cocker spaniel puppy.  I put in a ton of work with him.  I potty-trained him.  I ran home from work on my 30 minute lunch break every day for months in order to take him out to go potty and feed him.  I taught him to play fetch, I took him for walks.  And you know who he choose as his person?  My husband, of course.  It didn't matter that he was supposed to be MY dog.  He loved Jake.  He adored Jake.  To be perfectly honest with you, Jake was his "b*tch".  I say that as fondly as I possibly can.  My husband is a pushover.  Peppy got into the habit of insisting he be brought outside every hour on the hour all night long.  And my husband accommodated him.  We had Peppy for a little over a year before Lily came along.  Long enough for Peppy to fully cement the idea in his head that Jake was his to control, his to command.  And then Lily came along and changed everything.  Jake no longer wanted to take him outside every hour on the hour.  As Lily grew and became more mobile, more interactive, Jake spent more time just cooing at her, playing with her.  Peppy got very jealous.  He never minded Lily, but he minded that Jake's attention was on something other than him.  It didn't matter that Lily adored him: 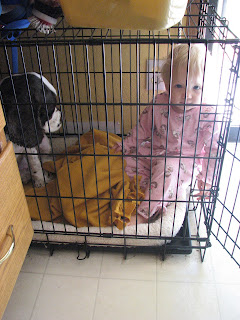 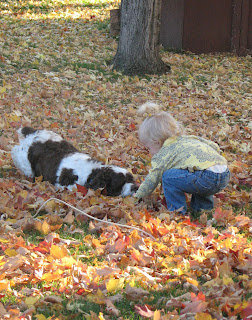 Peppy would be fine all day long, well-behaved, happy, playful.  But as soon as Jake got home, he'd start having potty accidents.  He wasn't happy.  And then, one night, we reached the end.  Peppy had an accident and when I went to hook him up to his leash and take him outside, he nipped me.  That's one thing I swore I'd never tolerate from a pet.  No biting.  The next day, I took Peppy to the closest no-kill shelter, sobbing the entire time.  I kept an eye on him from their website and he was adopted by a new family within a week.  Knowing that helped ease my guilt a little bit, but it still hurt to have to give Peppy up.
So, no dog for us for the moment.  I do want a dog again.  I'm dying to get one.  But I have some requirements.  I want a dog that will adore my children.  One who will be their best friend.  One with a fantastic personality.  Friendly, happy, playful.  I refuse to get another puppy.  It's so hard to know what their personalities are going to develop into when they're so small.  My mom's dog is actually nearly exactly what I want: 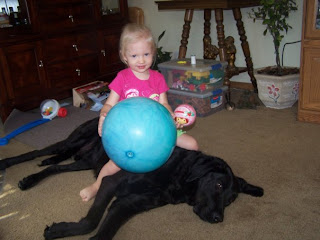 I found Cooper for my mom and her husband through a local rescue organization.  He was 6 months old and nearly 75 lbs.  Fully grown, he weighs in at a whopping 90 lbs.  He's half Golden Retriever, half Black Labrador Retriever.  He thinks he's a lap dog.  He'll sit with his massive head in your lap for an hour or more. He thinks he's Tigger.  He bounces when he's excited, but never jumps.  He lets all of my mom's grandchildren crawl all over him and when he's had enough, he just traps the kids down with one paw to let them know he's done.  He only has two faults....big dog = big poop.  And fur, fur, fur everywhere!  Whenever we go to visit, we come home coated in black fur.  The picture above is actually from one month before Lily was diagnosed.  He laid there and let her crawl all over him and never complained.  He was gentle with her, licked her face, and was as gentle as can be.
So, long answer short...we don't have a dog right now, but hopefully, someday in the not too distant future, we will have one again!
Posted by Cindy at 7:51 PM