Diagnosis is just the beginning....

Lily was admitted to her room after 10:00 at night on August 10th.  Poor Leo was exhausted by that point.  Luckily, he was still mostly just breastfeeding, so at least he hadn't gone hungry!  I walked up to Lily's room with my husband and Lily and had to immediately head back down to our car with Leo.  Leaving Lily there was one of the absolute hardest things I've ever had to do!  For practicality, I knew my husband had to be the one to stay with her.  But the mom side of me felt like she needed me more.  Or maybe it was just the fear of falling to pieces that made me want to be the one to stay.  I knew that as long as I was there with Lily, I couldn't afford to let myself shatter into a million pieces.  I had to hold it together.  The hospital Lily was admitted to was a good 25 minute drive from home.  To be completely honest, I probably shouldn't have been driving that night.  Imagine this....10:15 at night, it's pitch black, middle of Minnesota's "other season" (road construction), I have a 7-month-old child asleep in the backseat, and I'm sobbing my heart out as I drive past my exit.  Not the best situation.  But I made it home safely, put Leo to bed, and then sat there, unable to sleep and still crying.  I think I finally managed to cry myself to sleep at some point, just a few hours before having to return to the hospital for the education sessions that they give parents of newly diagnosed children.  Those poor educators and doctors!  I don't think they quite knew what to do with us.  How do you educate a parent of a diabetic who has had diabetes for more than 20 years herself?  I tried to encourage them as much as I could to do as they normally would.  I may have been diabetic for a long time, but for my husband, it was quite different to go from being the spouse of a diabetic to the parent of a diabetic.

For us, the hospital stay was probably the worst part.  We were at Children's Hospital in St. Paul.  An excellent hospital.  But there was one major problem.  The protocols for how to deal with a diabetic patient don't take into consideration the differences between a toddler and a school-aged child.  We had some major issues.  As most parents know, toddlers eat.  Often.  Their little tummies don't hold much and Lily was still in the 2-hour eating pattern.  Every two hours, she wanted something to eat.  She was hungry.  The nurses would only give her low-carb foods.  And they'd often forget to bring her a snack altogether.  At one point during our two-day stay, Lily was so hungry and frustrated about not getting anything to eat and not being able to communicate what she needed that she started banging her head on her hospital bed!  Would you believe that my heart breaks more over that than over her diagnosis?  The nurses did try as much as they could to accommodate Lily's needs, but sugar-free Popsicles and  meat and cheese trays were just not cutting it for Lily.  Luckily, her stay only lasted two nights and on the second day, we were able to take her home, after a quick (or, not-so-quick) stop at the pharmacy.

Now THAT is where the story really starts.  Bringing home a diabetic child invokes nearly the same emotions as bringing home a newborn.  The fear and anxiety over doing something wrong, of forgetting key concerns, of failing to adequately care for your child.  It all comes rushing back when they give you all these new rules for providing for that child.  In an ideal world, we would be able to follow every instruction that the doctors gave us.  We'd be able to care for our child perfectly, controlling their blood sugars to make it possible for them to feel as normal as they are able to.  We'd be able to feed them the snacks we were told to feed them, balanced and nutritious meals that are prepared with love and care to give the best balance for their little diabetic bodies.  But this isn't a perfect world and what you wish your child would eat is not always what your child wants to eat.  My husband really tried hard to offer Lily all low-carb snacks.  Lunch meat, cheese slices, carrots.  We quickly discovered that when your diabetic weighs less that 30 lbs, there is no such thing as a "free-food".  Even four grams of carbohydrates would shoot Lily's blood sugars to the moon.  And she quickly got burnt out on meat and cheese.  She wanted fresh fruit.  Every time she ate, we would have to give her an injection.  Which meant we also had to make sure that every time she ate, she consumed at least 20 grams of carbohydrates.  If we didn't give her insulin, she'd be horribly high.  If she didn't eat enough carbohydrates, she'd go low.  And really, no matter what we did, her blood sugars never fell where we thought they should.  It drove us nuts and the stress of it started to take a real toll.  We got snappy with each other.  We became sleep-deprived, stressed, unhappy.  None of that was Lily's fault and none of it was because of her diabetes.  We both had some serious coping-flaws and needed help figuring out what to do with our new reality.

Is it awful of me to say "to be continued" at this point?  It's getting late and I need to get some sleep.  But I do plan to return and tell more of the story.  It's cathartic to get it all out!  To anyone out there reading, thanks for sticking with it!  I hope I'm not boring anyone to tears!
Posted by Cindy at 9:29 PM 3 comments:

Dear Blog,
I've been avoiding you.  We're coming up on Lily's one-year anniversary of being diagnosed and I know I need to write down the story of that awful day.  But I don't want to think about it.  I don't want to relive it.  So I'm avoiding you and putting off the inevitable.  Now that I'm done with my Christmas in July craft exchange gifts (which I will post pictures of later!), I have no more excuses for avoiding you.  So...here I am, to recount and relive the events that brought my world crashing down around me. 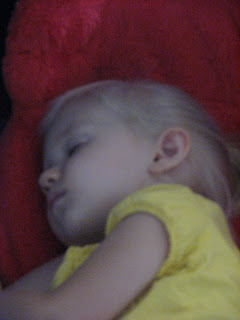 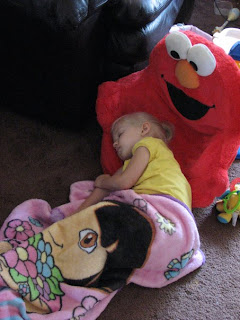 Life has a way of making sure you never get complacent, doesn't it?  I had to make an unexpected trip to Lily's pediatrician's office yesterday.  Lily had a couple of bug bites that looked kind of odd.  Round, red bump for the first couple of days.  Normal.  But then they turned into little red bumps in the middle of a round, red circle.  We never did find the bug that bit her and have no idea what kind of a bug it was.  But since this is Minnesota and you can never be too safe where bugs are concerned, her doctor is treating it as a possible Lyme disease infection.  Two weeks of antibiotics.  For a normal child, this probably wouldn't be much of a problem.  For a diabetic child, it's usually not so simple.  You see, diabetic children tend to have a sweeter body chemistry than other children.  You kill off the good bacteria along with the bad bacteria and there's nothing left to keep the yeast in check.  So, the two-week wait begins...we'll finish up the course of antibiotics and most likely need a second trip to the doctor in order to deal with a yeast-overgrowth, possibly in the form of thrush.

For all you other d-moms out there, a simple equation....DIABETES + ANTIBIOTICS = NOT A GOOD COMBINATION!

At least I'm not too worried about the Lyme disease though, right?  If that is what her bites are, we're catching it very early.  She's shown no signs of fever or of being ill yet.  Just the bites.  Here's to hoping it all clears up quickly!
Posted by Cindy at 7:02 AM 1 comment:

I've been busy.  My husband has been on vacation from work for the last week, which has been fantastic since he's let me sleep in so much!  Nothing like catching up on all that missed sleep, right?  I've also made the mistake of signing up to take part in two Christmas in July craft exchanges.  I'm late sending my crafts out and still need to work on finishing them up quick.  And the friends of my husband's that I was working on a baby blanket for had their baby three weeks early, which meant I needed to finish up the blanket quick.  It's amazing how things can just pile up sometimes, isn't it?  So, here's a few pictures of what I've been working on and a few tips for d-moms.... 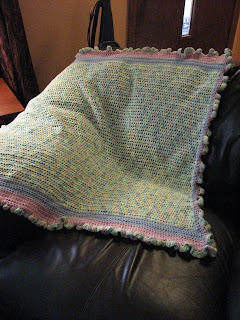 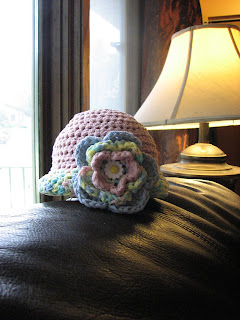 The matching hat
Now for the tips....you know how hard it is to deny a 3-year-old diabetic child a snack when they're in the midst of an insulin reaction, even after you've given them enough carbs to cover the reaction?  Well, here's our solution to that: 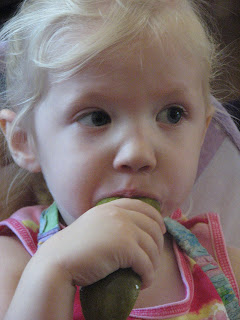 Lily loves her pickles!
I'll post more when I've finished my craft exchange projects.  Need to finish them and get them off in the mail.  I just have to hope that the recipients of them think they're worth the wait!
Posted by Cindy at 8:27 PM 3 comments: