This, that, and the other thing...

October sucked.  It was just plain awful.  Between Lily starting preschool and the changing of seasons here in Minnesota from not-winter to nearly-winter, we've been hit by one bug after another.  My whole fitness journey came to a screeching halt.  Colds knocked me on my ass time and time again.  I barely made it to the gym enough to get our health insurance kick-back on our gym fees!  And then November started and it wasn't any better.  More colds, more headaches, more pains, less energy.  We went from nearly-winter to fudge-it's-cold!  We've even got a bit of snow on the ground.  The fitness thing wasn't going anywhere still.  I finally went in to see the doctor.  I've had a few minor sickies going on for a while now.  The doctor started testing my testosterone levels about six months or so ago.  And they came up fairly high.  Well, this time, she added another test on and she's come up with a "tentative" diagnosis of Congenital Adrenal Hyperplasia.  To be honest with you, I'm not exactly sure what this means or what all it entails.  I know it has something to do with not having enough cortisol because of a deficient enzyme in the adrenal glands.  Who know?  Whatever it is, I have to go see a new endocrinologist.  One who doesn't specialize in diabetes.  Nothing like adding some more complications on.  In the meantime, I'm heading back to the gym and trying to at least move my rear end from my sick bed and out in the world with my children again!

Okay, now my real purpose in writing tonight.  I need to ask for prayers and positive thoughts for a friend of mine.  I have a wonderful friend, Christy.  She's got two gorgeous boys, ages 7 and 4.  And about a year ago, she and her husband decided that they wanted "just one more baby".  Life had other ideas for them.  Their adorable pair were born three months ago now.  A beautiful little girl who will be tremendously spoiled by her three brothers and a handsome boy who will no doubt be as much of a joyful handful of trouble as his two older brothers!  But, life has handed them something else to deal with in the midst of the pregnancy and new babies.  Christy's husband was diagnosed with colon cancer.  A very aggressive form of it.  He's finished up chemo, but the type of cancer he had is particularly prone to re-occur.  I'm remembering them in my prayers each night and I'd like to ask those of you who believe in the power of prayer and positive thoughts to remember them as well.  They're such incredible people and their four children are such sweethearts.  I'm hoping life has many more wonderful, amazing things in store for them!

Off to bed for me!  Sleep is such an incredibly precious thing, isn't it?
Posted by Cindy at 9:06 PM No comments:

I keep meaning to hop on here and do a "one-year-later" post about the whole fitness journey.  I promise I'll get to it soon!  But for now, I have tons of pictures to share.  I'll start with the funny one to give you all a good laugh!

Little explanation...my kids have an obsession with stickers and love to put them everywhere and anywhere in our house.  I find them on doors, tables, chairs, walls, and floors.  The one below is on my kitchen floor and every. single. time. I walk into the kitchen, I see it and have a certain thought that pops into my head.  I won't mention the thought because I want to see if anyone else picks up on it.  Let's just say that when you combine this sticker design with the new Buzz Lightyear and Belle sippy cups that Disney has out, you figure Disney just might need to rethink some of their products! 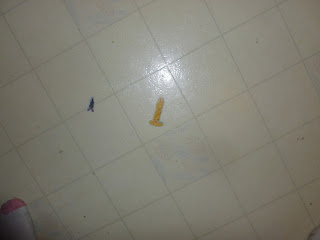 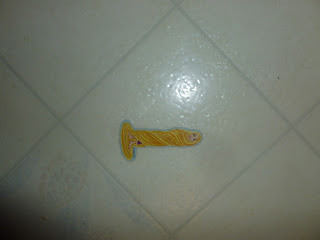 Next up...we did our ADA Step Out: Walk to Fight Diabetes this past Saturday.  I sucked royally at fundraising this year.  Less than $100, which was a huge bummer.  But, we did do the entire 5k walk this year!  Yay for the Roerig family!  We had some friends catch a quick family photo.  I'm usually the one behind the camera, so it'll be one of the rare pictures of all four of us! 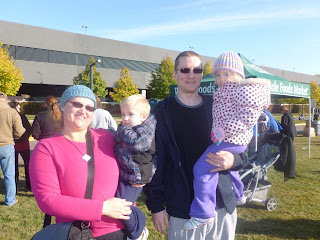 The Friday before the walk, the kids and I took a little bit of a trip.  We drove 45 minutes each way to go to a special animal rescue shelter in the amazingly beautiful town of Hastings (beautiful, historic, gorgeous).  We came home with two new family members who can usually be found curled up in my lap at night!  Lily has decided their names will be Gilbert (courtesy of Caillou) and Miss Bella Fuzzy (no clue where that one comes from).  They're beautiful and cuddly and so entertaining!  They gave me quite the giggle the other night.  Gilbert was cuddled in my lap and Bella came to join him.  She started burrowing in and I couldn't figure exactly what she was about until I started hearing the sucking noises...she was trying to nurse on poor Gilbert!  It sounded like a little squeaky toy.  I nearly died laughing!  Gilbert's the handsome black (4-months-old) and Bella is the tabby (2.5-months-old). 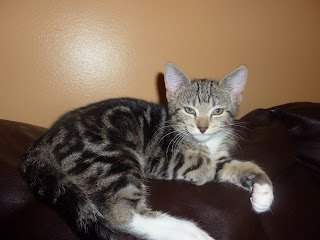 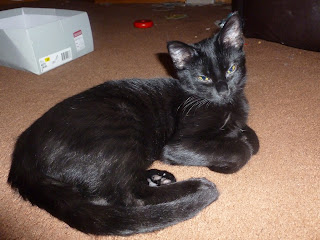 And last, but not least, I've taken up knitting!  I've been wanting to take a class through the community center, but it just didn't work out.  Only offered on Saturdays and those are pretty packed already!  So, I looked up a few sites on the internet and finally came across this one HERE.  They have some fantastic basic videos to show you how to do the stitches.  I'm actually doing pretty well with it, I think.  It's not as quick as crochet, but it is relaxing.  And the kittens are even beginning to learn to leave the yarn alone while they're curled in my lap!  Love that!  I decided to work on a skirt for Lily to start.  She needs more church-appropriate clothing!  I'll have to post on that one a bit later too.  But here's how far I've gotten so far: 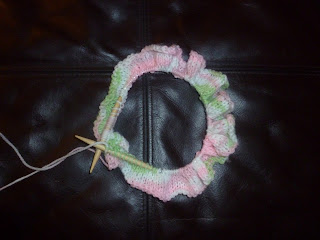 No designs just yet, but a pretty variegated yarn and simple stitches.  We'll see how it turns out!
Last one...my Pirate and my Princess.  They had a blast on Halloween and hearing Leo say, "Arrrr, Maties.  Yo, ho, ho!" and seeing Lily twirling in her pretty dress made my night.  Love them! 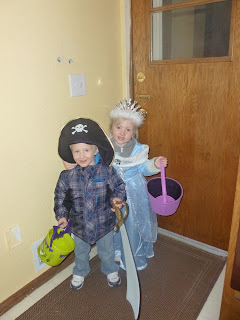