So did it work?

I'm going to bare some yucky stuff here before I get started on my post for the night.  This evening, my husband and I dropped the kids off at grandma's to go see Harry Potter (I'm a nut, seriously).  After the movie, we picked up Arby's for a quick dinner for the kids and ourselves.  My husband was trying to figure out the carb-count and he said he thought about 15 grams for the entire small curly fry order that Lily ate.  I didn't want to push, although I did suggest looking it up in our Calorie King book.  He gave her insulin for 41 grams of carbs.  Two hours later: 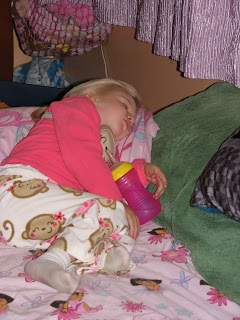 She's asleep with an empty water bottle.  My d-kid chooses a water bottle as her lovey!  Tested her...442!  Apparently, those small fries have 39 grams of carbs and our carb-count was off by 24!  Teaches us a lesson, doesn't it?  Never guess on the carb count!


I know you're all wanting to ask it, right?  Did the 30-day challenge work?  It's the question I get asked a lot in the last few days.  The whole point of the 30-days of exercise was to make it a habit and not just an option anymore.  And you know what?  The answer is YES!  But......

Here's the thing....when you think of a habit, the things that come to mind are brushing your teeth, combing your hair, maybe biting your fingernails....all little things.  Things that don't take much effort to do and take no planning at all.  Exercise is not like that.  It requires planning.  It requires effort.  You have to dress for it.  You have to pack a bag to go off to the gym.  You have to check blood sugars (x2 here).  I have to feed the kids a snack just before we go so they don't get hungry while they're in the child care center at the gym.  And the fact is...I'm just not a morning person.  It takes me time to get going each day.  So it's usually mid to late afternoon before we make it to the gym.  But....in the 21 days in November, I've only missed making it to the gym 5 times so far!  One of those days was my "break" day at the end of the 30-day challenge and it was spent walking around the zoo with the kids for a few hours.  Another day was spent running around The Children's Museum.  Even on the days when we don't make it to the gym, we are more active than we were before.  We get out and have fun and run around and enjoy each other's company.  And the ultimate truth....every day, I do get a feeling that I can only describe as being "compelled" to go to the gym.  I've ignored it once because I had a head cold coming on, but that's the one and only day that I've really just skipped it altogether.  Not bad considering that in the past year and a half that we've had our gym membership I've been lucky to make it to the gym even 5 times in a month!

It's funny....my husband and I have been together for more than 10 years now.  Every Christmas, Valentine's Day, Birthday, etc., I've asked him for the same item, which he's never once bought for me yet....a perfume that he would like me to wear.  This year, for Christmas, my wish list is very different.  Thanks to Reyna's sister's blog, I've discovered a couple of new items that she has made sound so fantastic that I want some too (and no, I have no delusions about running 100 mile races even if I do get these items).  Top two items on my list?  Snuggbuds for my iPod because I hate having to continuously push my current earbuds back into my ears.  And Mizuno running shoes.  They have an awesome program to help you figure out what kind of shoe would work best with your type of gait.  I'm seriously coveting both of these items right now!  Seriously though....so funny that both of my top items are fitness-related this year when I've been using excuses to avoid fitness for so many years before this!  Just wish I would have figured out how good being in shape and exercising feels before I'd gotten as far down the wrong road as I did!
Posted by Cindy at 8:43 PM