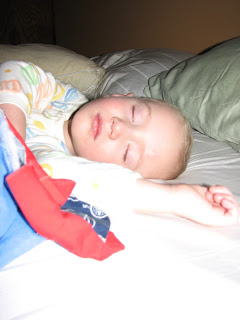 He's a little devil all day long, driving me crazy and getting into anything and everything.  Today, he poured almost an entire bottle of New Skin out on his hands.  Ick!  And I found this waiting for me when I went to put on my slippers: 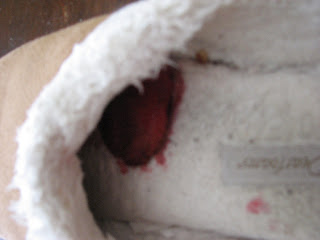 Squished strawberry.  I decided it wasn't worth saving.  For as much trouble as Leo is during the day, he looks equally innocent at night, when he sleeps.  He's got the most beautiful, adorable, little face!  I know if he isn't hit by horrible acne or anything like that, we're going to have our hands full when he's a teenager.  He hates getting into trouble and whenever we're upset with him for something he's done, he comes up with enormous crocodile-tears and says, "Kiss-hug.  I want kiss-hug."  You're not allowed to say no to that, no matter how upset with him you might be.  He crawls into your lap, grabs your face, and plants one on your lips.  Honestly, by that time, we're usually too busy laughing about how cute he is!

Other than Leo's messes and the two-hour-countdown that is Lily's d-care (and my own), I've also been busy with the gym.  My weight is fluctuating a bit.  I've noticed that it jumps up a few pounds every now and then and the bump up is usually followed by a plummet in the numbers.  I'm still working out a lot.  My goal is 5 times a week, minimum.  We've been sick with colds and pinkeye and have had to miss some days at the gym for that.  Overall though, I'm doing good with it still.  I'm burning close to 1000 calories each time I go, listening to my body and taking it easier when I need to or hitting it harder when I feel up to it.  I'm increasing my water consumption (FYI...Crystal Light Natural Cherry Pomegranate is DIVINE!), trying to eat healthy, and just generally getting through the days.  My wonderful husband encouraged me to purchase a new bike.  I used to ride all the time when I was a teenager and we lived in a more rural area.  I'm hoping to get back into riding.  I picked out a Novara Mia from REI and we picked up a new bike trailer to attach to it so I can start taking the kids for rides as soon as the snow starts to melt.  I'm hoping that's soon!

On to the story!  My husband turns 34 tomorrow.  I get to call him old for exactly 10 days before I join him at 34.  We just passed the 11th anniversary of our first date and since this time of year always brings back those memories of how we met and fell in love, I thought I'd share the story with you.  Hopefully I can do it some justice! 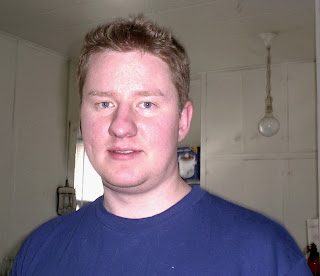 We met in February, a few weeks before we went on our first date.  I was a student at the University of Minnesota and was honestly hating it.  It was large and impersonal and I had a hard time meeting anyone there.  So I joined a sorority.  Through the sorority, I met a few frat boys.  One of my sorority sisters was dating a member of the IT-geek-fraternity.  One of my husband's friends from high school was an IT-geek member.  We just happened to meet up at a party one night.  Being the geek-frat, the parties were pretty tame.  I was usually the designated sober-sister, by choice.  I remember seeing him across the room, talking to his friends.  He had these gorgeous, light blue eyes, a single enormous dimple, and I wanted to meet him!  Isn't he adorable?

I made a comment to his friend about introducing them all to us.  Now, let me just make something clear....even then, I knew my sorority sisters were a whole lot cuter than me.  One of them was this short, lush version of Snow White...dark hair, blue eyes, red lips, and cuter than cute.  I was surrounded by gorgeous blondes and brunettes and redheads.  But for some reason, once we were introduced, he spent an hour talking to just me! I couldn't believe it.  And then I got called away to check on one of my sisters.  Luckily, the fraternity had a small parking lot.  My car was blocking in his truck and they had to seek me out a little bit later so I could move it and he and an additional non-frat friend could get home.  As I was heading back inside, he stopped me to ask for my number.  Neither of us had pen or paper, so I gave him the sorority house number because it was easy to remember....331-DATE.  Yup, by a fluke coincidence, our house number worked out to that.  Super-easy to remember, right?  But no wonder it took him 2 weeks to call me!

March 12th is the anniversary of our first date.  He happened to be home on spring break and we met up at the fraternity again the night before.  He asked me out.  I said yes.  Our first date was a lovely trip to Perkins, where we talked in between the waitress badgering us into ordering a blueberry muffin.  We followed it up by heading back to the sorority and watching a bit of a movie (and kissing a bit!) on the couch in the common room.  The next night, we went out again.  And the third night, he asked me if I'd go to his friend's wedding with him...in October!  By the end of the first week, we were head-over-heels for each other.  He was the first to say it out loud.  But I tease him....after that first date, I went up to one of my closest sister's rooms and told her I thought I was in love.  He was amazing.  Sweet and kind and wonderful.  I knew I was lucky to have found him.

Tomorrow, I'm going to wake up with the sure knowledge that the world is a much more beautiful, much brighter, much happier and worthwhile place because of a man who was born 34 years ago!
Posted by Cindy at 9:37 PM