I think I might be safe posting these now.  I know Sue at least has received her gift.  And I'm pretty sure Michelle isn't following my blog.  I'm hoping she received her gift already too, but she lives in Australia, so that's kind of iffy.  So here's the story....

I love doing free-form crochet.  I feel like the yarn has ideas of it's own on how it would like to end up.  Both of the people I was gifting to in the Christmas in July exchange lived in much warmer climates than I do.  Minnesota really doesn't get anywhere near 100 degrees most of the time and the majority of our year is spent in jeans and long-sleeves because of the chill factor.  Don't get me wrong, we do get some heat in the summer, just not anything near what people closer to the equator deal with.  So...for the first gift, I started with the idea of turning a fingering-weight, baby alpaca yarn into something lacy.  The yarn had a different idea: 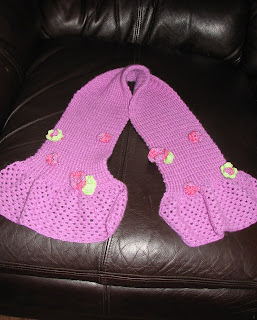 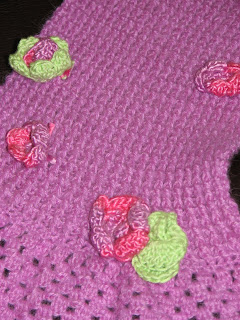 The yarn decided it wanted to be a lovely, ribbed scarf with a shell ruffle on each end.  I added in some tiny flowers with silk yarn and leaves in a cotton microfiber crochet thread.  I know it's not really a practical thing, especially considering that I was sending it off to southern California.  But it's so much more fun to receive something totally impractical and maybe it will come in handy once the seasons turn and the colder seasons start to hit.

The second scarf actually went along with what I originally intended for it.  I had a fabulous, thrifty find from a local yarn store: a skein of Araucania Ulmo yarn.  Pure cotton in a deep burgundy color that showed stitches perfectly.  I decided that I'd do a spiral scarf with the yarn and then added on an edging with a pink/cream/white variegated silk yarn: 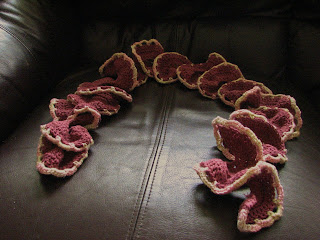 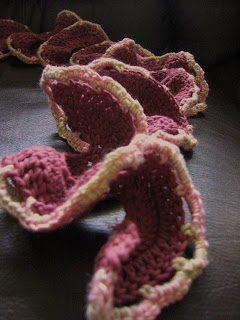 I'm so happy with how they both turned out!  I hated having to send them out so late (they should have been postmarked June 30 and I didn't get them out until July 20!), but I really hope I made them worth the wait.  I have a rule for craft exchanges...I refuse to gift something to someone that I'm not horribly tempted to keep for myself!  I just can't do it.  If it's not up to par with something that I would want to own, then it's not worth sending out!

Okay, I'm off to test Lily's blood sugar again and then maybe get in a little more work on the spiral baby blanket I'm working on for a friend.  She's due with a baby girl in just a couple of weeks and I'm hoping to get the blanket done before baby arrives!  Oh, one more picture to share before I go, just because these are the two creations I'm most proud of: 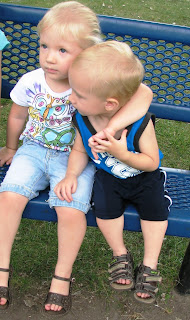